You need an electric staple gun or finish nailer! That would have made the job much less stressful for you and easier on D2.
Top

We definitely need a finish nailer! Funny how I have done this many projects and still don't have one of those.

D2 stayed busy last night after I left. Here are the new pictures that she took. 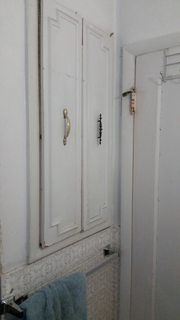 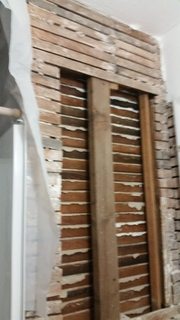 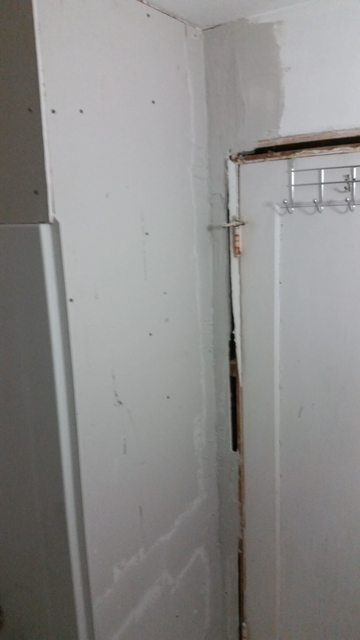 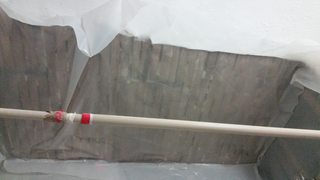 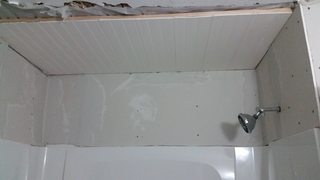 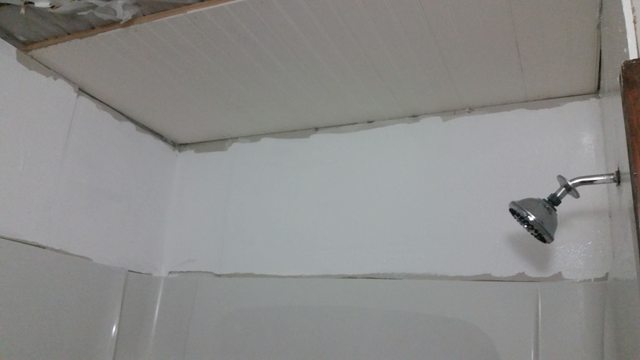 Heading back over in a while for more punishment.
Matthew 19:26 Jesus looked at them and said, "With man this is impossible, but with God all things are possible."
"Stop Dreaming About the Good Life and Start Living IT !"
Every little bit ... is a little bit.
Top

It’s coming along nicely! Don’t over do it FF!
Top

It's going to be wonderful when it's done!
Top

Yesterday, in the afternoon, we went over to work on the bathroom project. D2 got a wild hair and worked on it some last week. When I found out I implored her to stop, but she "I know what I am doing mom" ed me. That meant that yesterday the first TWO hours were spent un-doing the work she did and re-doing it correctly. I really wish she would watch and learn and listen, so she COULD work on it and be helpful.

All she did was "some more sheet rocking" according to her. Ok, so how wrong could that go? My first clue that there would be an issue was that she told me to "bring another bucket of putty". I used a whole tub on the last room that we did, but it was an entire bedroom. This little partial bit of bathroom wall should in NO WAY take a bucket of putty.

Sure enough. She had installed two small pieces of rock, one along the side of the bathroom window and the other behind the toilet. Both seams had a thick hill of putty covering the tape. (think speed bump). The sheet beside the window was gapped out about 3/4 an inch over the sheet I had previously installed below it. She couldn't see the problem. I ended up popping that piece back off. She had installed it OVER a nail that was still sticking out of the stud below. Fortunately it was easy to remove, because out of 5 screws attaching it to the wall only 1 was in the stud.

Then we had to re-wet the wall and remove the tape mountain via scraping. Then I had to re-tape. There is still a seam mountain over the top of the window that needs to be dealt with. I asked her why (oh why) so much putty just as a first seam coat. She said, "I was going to sand it." She would have been sanding for a month.

Sadly those were the good repairs.

The worst part... and why we needed a new bucket of putty... she puttied up the "big old gaps, you left in the sheet rock mom." She FILLED the window weight pocket on both sides of the window with putty! It was a nice smooth job on the surface. Of course the window weights would have been sealed in the "up" position forever and the window would never open correctly again. We had to dig it all back out and scrape the wood window trim where the window molding will eventually attach to cover that "big old gap." The putty had been in the wall for a week and was mostly still wet as the day it was first applied. It was a giant goopy mess! Thank goodness she had run out of putty. She was going to fill that "big horrible gap" all around the bathroom door as well!!

We did get a little more accomplished, but not much. We got the first layer of putty up in the corner of the room, repaired the messed up place (D2 helpful another time) in the ceiling, and got a bare start on some more of the finish trim. IF I can keep her from "helping" unless I am there, we should move along fairly quick in the future.
Matthew 19:26 Jesus looked at them and said, "With man this is impossible, but with God all things are possible."
"Stop Dreaming About the Good Life and Start Living IT !"
Every little bit ... is a little bit.
Top

Yikes!!! It’s definitely time to pack the tools and putty up to bring home with you when you leave! I “know” she was trying to be helpful and move the renovation project along but you cannot leave anything there for her to attempt a second round of helping or you’ll still be remodeling in September.
Top

I think this little episode woke her up a bit. She just doesn't listen when I explain and demonstrate.

When we first did the demo and again when we did the insulation I talked to her about the window weight and showed her how they work. She even was shown first and then did the job of oiling the pulley within that pocket. I wanted her to understand how the window works and why it is important to keep the pocket open and the pulley and ropes maintained. After all of that she stuffs the weight pocket full of spackle. Explain to me... HOW do you not remember that?
Matthew 19:26 Jesus looked at them and said, "With man this is impossible, but with God all things are possible."
"Stop Dreaming About the Good Life and Start Living IT !"
Every little bit ... is a little bit.
Top

Maybe she doesn’t want a functioning window in the bathroom.

No. She is just a goober head.

She can cook... amazing. She cleans... whole house neat as a pin. Good mom. Smart. Good at her job. She can paint things. Hard worker... she can even work on cars! Just stay away from the hammer and no DIY. Every handle in her house is wiggly. She just has no clues as far as home maintenance.
Matthew 19:26 Jesus looked at them and said, "With man this is impossible, but with God all things are possible."
"Stop Dreaming About the Good Life and Start Living IT !"
Every little bit ... is a little bit.
Top
Post Reply
19 posts